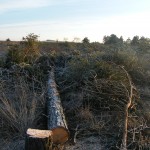 It can appear that the felling of trees is incompatible with the rest of our work which revolves around the conservation of species and habitats. This is not the case! Hesketh Ecology have been offering felling services since 2011 and work primarily on peat bog restoration schemes and habitat management projects for protected species. We only conduct this work during the winter (i.e. outside of the bird nesting season). This winter (2012/13) we are involved in the restoration of a lowland raised peat bog in Northern Cumbria, habitat management for natterjack toads on the Lancashire coast and habitat management for small blue butterflies on the West Cumbria coast.

Due to human influences many habitats and species have suffered and become degraded resulting in reduced biodiversity. Peat bogs for example form some of England’s most scarce habitat and provide a unique home for a wealth of plants, animals and insects. They also provide an important feeding and stopping-off point for native and migrating birds and act as a carbon store. Historically many of Cumbria’s peat bogs have been drained for domestic and commercial peat extraction. As the peat dries, trees become established which further exacerbates the drying process resulting in the loss of this valuable habitat. By removing the trees, ditches can then be blocked and the bog allowed to re-wet, thus allowing the species which rely on this habitat to re-colonise  and (hopefully) thrive. The benefits of removing tree cover can be almost instantaneous.  For example, when felling in December 2012 we were privileged to see a short-eared owl hunting over areas cleared only 24 hours previously. This was an area which would have been entirely inaccessible to this species when the birch woodland was present!

In the coming months we will be clearing gorse from sand dune systems, sea buck-thorn from post industrial sites and non-native snowberry from an otherwise species rich traditional hedgerow. Our felling services are designed to meet specific conservation objectives and as such compliment our other work and contribute to our aim of conserving species and habitats.